The city of Cordoba has a well-preserved Jewish quarter, located in the historic centre, which is part of the area named a World Heritage Site by UNESCO in 1994. The Jewish Quarter retains the traditional urban layout of a medieval Islamic city, with two central intersecting streets surrounded by a labyrinth of smaller streets which often end in dead ends or narrow alleys. The current Jewish quarter stretches from the Puerta de Almodóvar to the Mosque-Cathedral and the episcopal palace (the former Arab fortress) to the south. Calle Rey Heredia Street mark the eastern border of the neighbourhood, and it stretches as far as the city wall in the west. These limits coincide broadly with Calles Judíos, Albucasis, Manríquez, Averroes, Judería, Almanzor, Tomás Conde, Deanes and Romero and the squares of Cardenal Salazar, Judá Leví and Maimónides.

The Jewish quarter was separated from the rest of the city by a walled enclosure which both isolated its inhabitants and protected them from the attacks of the Christians. We know that one of the gates leading into the district was called the Gate of Malburguete and was located in front of the Mosque-Cathedral at the end of the modern Calle Judería. But not all the Jews lived in this neighbourhood: they lived here at first, but after 1260, moved to nearby districts and, later, to commercial areas within the neighbourhood of San Salvador – the site of the modern City Hall - and San Andrés, together with the parish of San Nicolás de la Axerquía – on the banks of the river - and even as far as the north of the city in the surroundings of the Puerta Osario, Campo de la Merced and the Santa Marina neighbourhood. These movements prove that in that era, Jews were free to move around the city, and over the centuries, Sephardic Jews also lived in other areas of the city.

Alfonso X the Wise authorized in 1272 the occupation of other neighbourhoods of the city by Jews and established the Jewish quarter around the Mosque that we know today. However, magistrate Francisco Valdés ordered the Jews to be forcibly moved to the Alcázar Viejo neighbourhood in 1478. Faced with this setback, the Jewish community complained to the King and managed to return to their houses a year later. Next to the Osario gate, called Bab al-Yahud (Gate of the Jews) before the Christian conquest, stands the church of San Miguel, which conserves a Hebrew inscription of this time. The inscription is a funerary cippus or gravestone from a Jewish cemetery, which was reused in the construction of the church, and is located in the central apse, near the presbytery on the pulpit side. The three-line inscription is worn and difficult to read, but according to expert Jordi Casanovas, reads: "Meir, son of Rabbi G... may his soul rest in eternal life”. 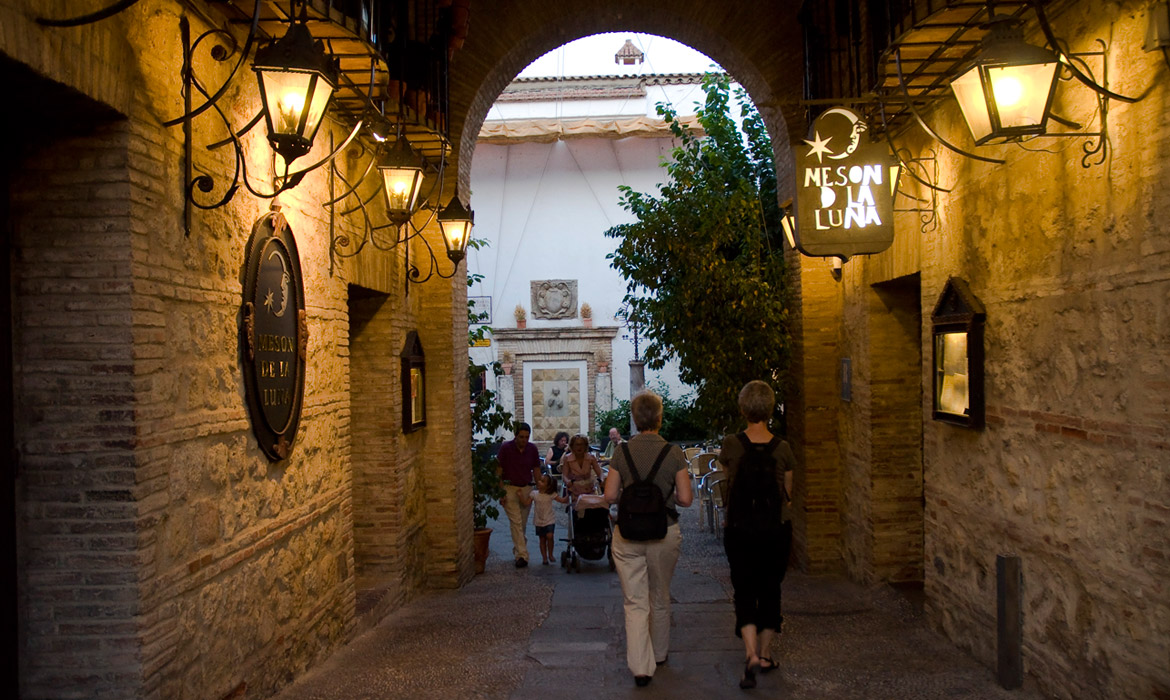 In 2008, the Network of Jewish Quarters in Spain created a small pedestrian symbol, used in all the member cities belonging to the Network, which travellers can recognize on their visits and identifies these cities as members of the same group, the same itinerary: the Paths of Sefarad.

The symbol (the Network’s logo) consists of a small bronze plate measuring 13 x 13 cm and represents the outline of the Iberian Peninsula formed by the four letters of the Hebrew alphabet which spell the word "Sepharad" (Sámech, Pe, Resh and Dalet). Visitors can follow these indications to guide them on the recommended routes around the Jewish Quarter of each city.

In addition to these pedestrian symbols, the cities in the Network have street signs which combine the Network’s logo with the city’s own signage.