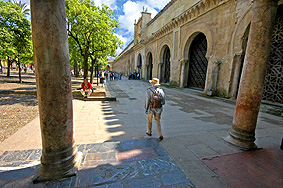 The appearance of the courtyard has undergone many changes in the course of history. One important change was when it was extended to the north during the reign of Abd al-Rahman III, when the former minaret of Hixem was knocked down, or the extension to the east carried out by Almanzor. In Islamic times, the area was used for public events such as administering justice or teaching, and the arches connecting the courtyard with the main body of the mosque used to be open. It was intended from the very start as a courtyard with porticos (the galleries were started by Abderramán I and finished in the time of Hixem I, who built the minaret and the ablutions hall). However, the cloisters visible today date from the beginning of the 16th century, when Bishop Martín Fernández de Angulo entrusted the architect Hernán Ruiz I with the task of totally rebuilding them. Beneath the ground where the orange trees are planted lies a large water cistern which ensured in Moslem times a constant supply of water for the ritual ablutions. The first mention of palm trees being planted here goes back to the 13th century, and there were orange trees in the 15th century, with olive trees and cypresses being added in the 18th.