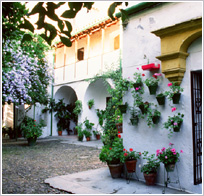 The extensive monastery of Santa Cruz, run by the Clarisse nuns, is in calle Agustín Moreno, near the Church of San Pedro. It was founded in the 15th century, but due to later alterations, mostly from the Baroque period, very little of its original Gothic architecture has survived. The semi-circular archway in the entrance leads to the courtyard.  The approach to the church features the coats of arms of the convent's patrons, the Marquises of Escalonias, whose tombs lie below the pews in the presbytery. The church was totally reformed in the 18th century, and there is an attractive plinth of 18th century tiles as well as beautiful decorative carving in the higher and lower choir stalls.