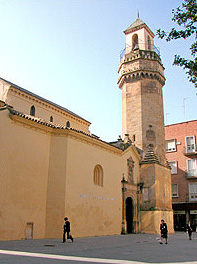 Right in the centre of Cordoba, in the Pedestrian Precinct of Gran Capitán, stands this imposing building, which was started in the 13th century and reformed in the 15th in Gothic-Mudejar style. It has one of the most attractive towers of all the Fernandine churches, with polygonal sides, built on top of a former minaret. The north entrance is also exceptional and was built in 1555 by Hernán Ruiz II. On the inside, there are several works of great artistic merit, such as the 16th century Baptismal Chapel, the main altarpiece in Baroque style, the Eucharistic Vessel by the goldsmith Damián de Castro and the decorative ceiling in the main nave.