Home / Castle of the Christian Monarchs

Castle of the Christian Monarchs

Castle of the Christian Monarchs

The Alcázar (castle) of Cordoba, with its thick defensive walls, served both as a fortress and a palace, and is a perfect illustration of the development of Cordoban architecture through the ages. Roman and Visigoth ruins lie side by side with Arabic remains in this magnificent building, which was once the favourite residence of the different rulers of the city. However, when Cordoba was taken by Fernando III «the Saint» in 1236, the former Caliphal Palace was in a pitiful, ruinous state. Alfonso X «the Wise» began the restoration work, which was finished off during the reign of Alfonso XI. It has fulfilled many different functions over the years, such as Headquarters of the Inquisition, or a prison (first half of the 20th century).

At first sight, one of the most surprising features of the fortress is its almost rectangular shape with its long walls made of solid blocks of stone (ashlars) and four corner towers (the tower of the Lions, the main keep, the tower of the Inquisition and the tower of the Doves). Inside, the different halls are distributed around courtyards with an exotic array of flowers, aromatic herbs and mature trees. Both rooms and corridors are covered by stone cupolas in Gothic style.

In one of the galleries leading to the halls, there is a Roman sarcophagus on display, a pagan work dating from the early 3rd Century, on the front of which there is a sculpture in relief depicting the journey of the dead to the underworld through a half-opened door.

The most interesting hall is the small Baroque chapel, the Hall of the Mosaics, where a series of Roman mosaics, discovered underneath the Corredera, are displayed around the walls. Below this hall are the baths, built in Arabic style, which are divided into three rooms with vaulted ceilings containing the familiar star-shaped openings. The boiler which provided water for the baths was situated below the Main Keep.

There are two courtyards, but the one in Mudejar style is by far the most attractive. The cool marble floors and the murmur of water, running down the channels and into the ponds, refreshes the hot summer air and soothes the weary visitor’s spirits. The spacious gardens, stretching out to the west, give this Alcázar, or castle, an air of monumental grandeur. 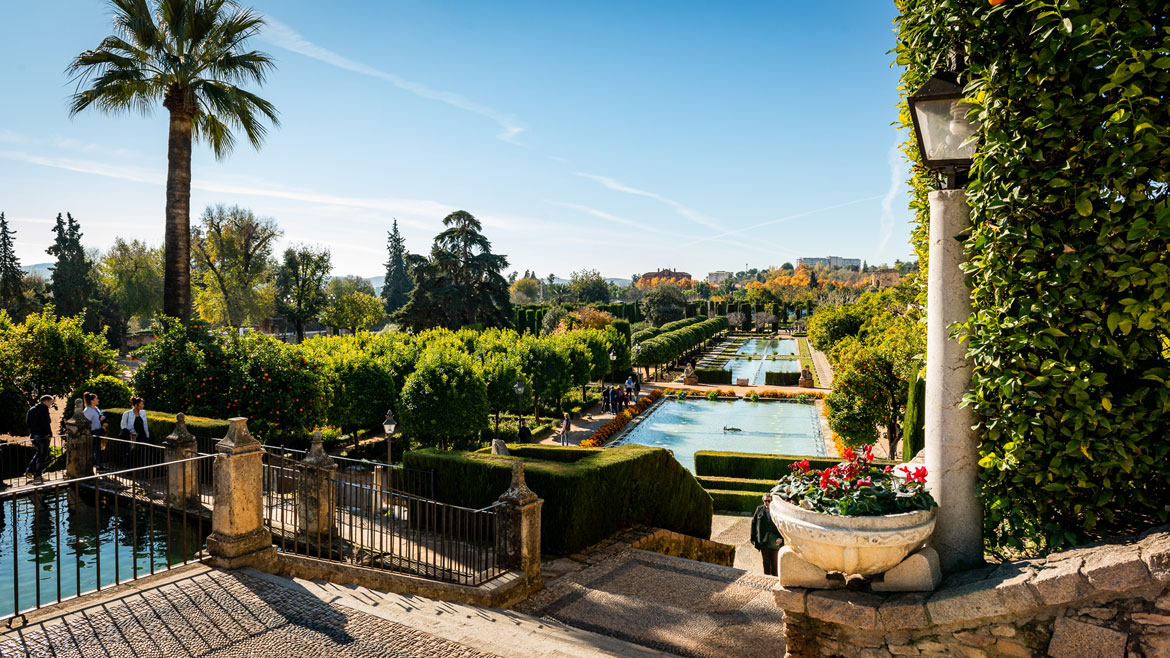